10 Ways to Fight a DUI in Washington DC 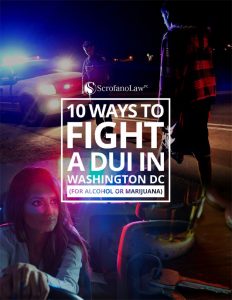 HAVE YOU BEEN ARRESTED FOR DUI AND WERE TREATED UNFARILY?

Getting arrested for a DUI in Washington DC has always been a serious offense and with weed now legal in DC, it’s easier than ever! That’s right… Many people don’t even know that you can get a DUI for alcohol OR marijuana use!

ARE YOU WORRIED ABOUT JAIL TIME, FINES, AND LOSING YOUR DRIVER’S LICENSE?

Penalties for DUI can range up to 180 days in jail and/or a $1,000.00 fine. Some offenses carry mandatory minimum jail time. Getting convicted for DUI can cause you to lose your driver’s license for 6 months to 1 year. There are also tons of other consequences for getting convicted of a DUI. These can include loss of security clearance, skyrocketing insurance premiums, and the social stigma of having a criminal conviction on your record.

WOULD YOU LIKE TO LEARN ABOUT SUCCESSFUL STRATEGIES TO CHALLENGE YOUR DUI ARREST?

Choosing a DUI lawyer can be extremely difficult especially if it’s the first time you have ever had to hire an attorney for a criminal case. There all lots of choices and lots of ads out there. Sorting through it all can be a daunting task. On top of all that, hiring a DUI lawyer will likely cost thousands of dollars. On top of that, hiring the wrong DUI lawyer can cost you even more than money—it can cost you your freedom.

Wouldn’t you like to have learned some of the potential strategies to challenge DUI cases in DC before speaking to a DUI attorney so you can have an informed discussion about how best to attack your case?

FILL OUT THE FORM TO GET OUR FREE GUIDE: 10 Ways to Fight a DUI in Washington D.C. and find out if any of these strategies apply to your case!